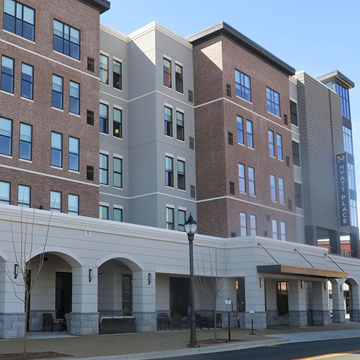 December 3, 2021 – The Aiken Municipal Development Commission (AMDC), today announced the selection of  RPM Development Partners, LLC, (RPM) a team led by Raines Development (rainesco.com). Raines, a Charleston/Florence, SC-based firm, is the preferred group with which to negotiate a public-private partnership to redevelop a key block of downtown Aiken.

The initial Purchase and Sale Agreement announced today gives the AMDC and RPM until no later than Summer 2022 to come to terms on a mutually beneficial Master Development Agreement. The agreement will include complete designs, engineering and permitting required to move forward with Project Pascalis. Any such development agreement would establish, among other things, the price the developer would pay for the property, and the amount the developers would be required to invest in the proposed privately funded, owned/operated hotel and residential portions of the project. The AMDC also intends for the agreement to hold the project to strict completion deadlines that will ensure it moves at a deliberate pace and avoids potential delays. The Master Development Agreement being negotiated would also establish fixed pricing for the proposed conference center and parking facility that would be purchased by the City of Aiken upon completion.

Established in 1988 as a family-owned business, Raines has grown into a fully integrated development, management, and investment firm that develops, operates, and owns the world’s leading hotel brands as well as boutique hotels. According to the company’s Website, Raines has maintained a family-oriented culture that believes in building relationships with partners and being an integral part of the communities where they operate. Additionally, the RPM team includes multi-family housing developer Lat Purser & Associates of Charlotte, NC, (latpurser.com), an experienced firm engaged in successful boutique residential development throughout the Southeast. The Raines-led team was assembled by and includes a group of Aiken investors, including Aiken Attorney Wm. Ray Massey. The RPM team was selected following AMDC interviews and extensive vetting of numerous potential developers.

“We believe we have the very best development team at the table,” said AMDC Executive Director Tim O’Briant. “A lot of hard work and consideration has gone into getting this far, but the most critical phase begins today. That’s the negotiation with RPM to flesh out the all-important details of this once in a lifetime opportunity to sustain our community for the next century.”

The work to hammer out a development agreement that is fair to both the taxpaying public and the private-sector developers will likely continue in earnest through at least the first quarter of 2022. “Just any deal won’t do,” O’Briant said. “In the end, we’re going to have the right agreement for Aiken or no deal at all.”

Last month, the AMDC purchased this critical portion of Aiken’s downtown suffering from disuse and deterioration. Acquisition of the property is a gigantic first step and precedent to the redevelopment of a significant portion of downtown. The AMDC plans to spur revitalization of this central block with private investment in an area that has been ignored and even avoided for many years by investors.  Redevelopment will address the health and safety concerns attendant to abandoned buildings and will also significantly add to the City’s tax rolls both due to the specific redevelopment of this property acquired by the AMDC and due to anticipated follow-on private sector investment throughout the downtown district.

The proposed redevelopment of the this property consists of the following components (1) a privately funded 100-key hotel on the corner of Richland Avenue and Laurens Street with full amenities, (2) not less than [100] privately funded multi-family housing units and mixed-use retail; (3) a conference center integrated into or adjacent to the hotel with not less than 25,000 square feet, and capacity for meetings with up to 450 participants; and (4) structured parking garage with no fewer than [300] parking spaces.

ABOUT AMDC
The City of Aiken’s Municipal Development Commission is responsible for advising Aiken City Council of exiting blighted and/or conservation areas in whole or in part within the city limits of Aiken. The Commission also makes recommendations to the City Council on the redevelopment of the blighted and/or conservation areas in the interest of the public health, safety, morals, or welfare of the City of Aiken residents.

No comments to show.